Like all conferences in these times, FOSDEM will take place as an online, virtual event. For all the FOSDEM regular attendees, it will certainly be a very different experience, and for sure, we will all miss the chocolate, waffles, beer, mussels as well as the rainy, muddy, snowy, foggy and cold weather that characterize Brussels in early February. But nevertheless, knowledge sharing and discussions must go on, and FOSDEM will take place! As usual, FOSDEM takes place the first week-end of February, on February 6-7, and the event is completely free, with no registration required.

This time around, Bootlin is once again contributing to FOSDEM:

Make sure to check out the rest of the Embedded Devroom schedule, as well as the overall FOSDEM schedule. 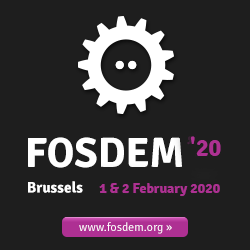 This week-end takes place one of the biggest and most important free and open-source software conference in Europe: FOSDEM. It will once again feature a very large number of talks, organized in several main tracks and developer rooms.

Bootlin CTO Thomas Petazzoni will participate to the FOSDEM conference, of course attending many of the talks from the Embedded, Mobile and Automative Devroom, to which he participated to the talk review and selection. Do not hesitate to get in touch with Thomas if you want to discuss career or business opportunities with Bootlin.

In addition, Thomas will also participate to the 3-day Buildroot Developers meeting which takes place in Brussels right after the FOSDEM conference, kindly hosted by Google. During 3 days, some of the core Buildroot developers will work together to discuss the future of Buildroot, as well as review and discuss pending patches and proposals.

The FOSDEM conference will take place on January 30-31 in Brussels, Belgium. Like every year, there are lots of interesting talks for embedded developers, starting from the Embedded, Mobile and Automotive Devroom, but also the Hardware track, the Graphics track. Some talks of the IoT and Security devrooms may also be interesting to embedded developers.

Thomas Petazzoni, embedded Linux engineer and CTO at Bootlin, will be present during the FOSDEM conference. Thomas will also participate to the Buildroot Developers Meeting that will take place on February 1-2 in Brussels, hosted by Google. 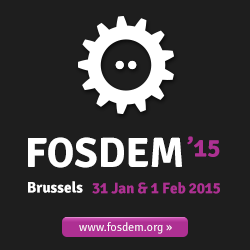 For many open-source developers based in Europe, the FOSDEM is probably the most useful, interesting and exciting conference. Once again this year, several Bootlin engineers will attend the conference:

If you are attending, and want to know more about Bootlin, or discuss career or project opportunities, do not hesitate to contact us prior to the conference. Many of us will probably attend a significant number of talks from the Embedded track, so it should be easy to find us.

Last but not least, Alexandre Belloni will be giving a talk about Starting with the Yocto Project, which will take place on Sunday, at 3 PM in room Lameere.

Finally, Thomas Petazzoni has organized and will participate to the Buildroot Developers Meeting organized right after FOSDEM, and sponsored by Google and Mind.

The Bootlin team wishes you a Happy New Year for 2015, with plenty of optimism and energy!

We continue to work significantly on support for various ARM processors in the Linux kernel. Our contributions to the latest kernel releases:

One of the highlights was that we added support for the Atmel SAMA5D4 SoC to the Linux kernel even before the new chip was announced by Atmel! That’s a very positive sign for customers when an SoC is supported in the mainline Linux kernel sources right at product launch, instead of having to wait for months or years before the community developers can catch up.

Note that we also added Atmel SAMA5D3 SoC support to Xenomai, a hard real-time extension for the Linux kernel. Thanks to this, the Atmel SAMA5D3 Xplained board can now run with the 2.6.x release of Xenomai.

Our involvement into the Buildroot project, a popular embedded Linux build system, is going on. Our engineer Thomas Petazzoni contributed 136 patches to the 2014.11 release, making him the second contributor by number of patches. Thomas is also taking care of the maintenance of the project on a more regular basis, reviewing and merging patches from contributors.

Besides our publicly visible kernel contributions, we do also work on customer-specific projects. Among the latest projects we have done:

Several Bootlin engineers will participate to the FOSDEM conference, taking place on January 30 and February 1 in Brussels. In addition, Thomas Petazzoni will be participating to the Buildroot Developers Meeting that takes place right after FOSDEM in the Google offices in Brussels.

Bootlin will participate to the Embedded World trade show on February 24-26 in Nuremberg, Germany. We will be present at Atmel’s booth and visiting exhibitor booths too. For people in Europe, this will be a good opportunity to ask your questions about our embedded Linux training and engineering services. In particular, you will be able meet our engineers Alexandre Belloni, Thomas Petazzoni (CTO), Michael Opdenacker (CEO) and Anja Roubin as well, the new person in charge of our training services.

This year again, most of the Bootlin engineering team (7 engineers) will participate to the 2015 edition of the Embedded Linux Conference on March 23-25 in San Jose, California. We submitted several talk proposals, but our presence won’t depend on the number of talks that are eventually accepted. Participating to this conference, and to its European edition in the fall too, is very important for us to make sure we do not miss any of the interesting developments in the technical community, and above all to strengthen our ties with the community developers. This helps us to be good technical trainers with valuable experience and information to share. The strong relationships with other community developers (and in particular with project maintainers) also help us when our customers contract us to add hardware support or features to official versions of community projects such as the Linux kernel.

Since the latest edition of this newsletter, we started running our new Yocto Project and OpenEmbedded course, and we released all training materials for this course. As usual, such materials are meant to be used by people learning by themselves too. All you have to do is get your hands on a Beaglebone Black board, read the slides and try to do the labs!

Our engineer Maxime Ripard also contributed documentation about the DMAEngine subsystem in the Linux kernel.

The news is that we will run new public sessions in Paris, in addition to the ones we usually organize in Toulouse, Avignon and Lyon in France. We are starting with our embedded Linux and our Yocto courses, but other topics will follow too.

So, here are our next session dates:

See sessions and dates for more details. Of course, we can also deliver our training courses at your location, anywhere in the world. Feel free to contact us for a quote.