Last month, five engineers from Bootlin participated to the Embedded Linux Conference in Portlan, Oregon. It was once again a great conference to learn new things about embedded Linux and the Linux kernel, and to meet developers from the open-source community.

Bootlin CEO Michael Opdenacker gave a talk on Embedded Linux Size Reduction techniques, for which the slides and video are available:

Bootlin engineer Quentin Schulz gave a talk on Power Management Integrated Circuits: Keep the Power in Your Hands, the slides and video are also available:

Of course, the slides from many other talks are progressively being uploaded, and the Linux Foundation published the video recordings in a record time: they are all already available on Youtube!

Below, each Bootlin engineer who attended the conference has selected one talk he/she has liked, and gives a quick summary of the talk, hopefully to encourage you watch the corresponding video recording.

Gabriel Huau from Witekio did a great talk at ELC about SWUpdate, a tool created by Denx to update your system. The talk gives an overview of this tool, how it is working and how to use it. Updating your system is very important for embedded devices to fix some bugs/security fixes or add new features, but in an industrial context, it is sometimes difficult to perform an update: devices not easily accessible, large number of devices and variants, etc. A tool that can update the system automatically or even Over The Air (OTA) can be very useful. SWUpdate is one of them.

SWUpdate allows to update different parts of an embedded system such as the bootloader, the kernel, the device tree, the root file system and also the application data.
It handles different image types: UBI, MTD, Raw, Custom LUA, u-boot environment and even your custom one. It includes a notifier to be able to receive feedback about the updating process which can be useful in some cases. SWUPdate uses different local and OTA/remote interfaces such as USB, SD card, HTTP, etc. It is based on a simple update image format to indicate which images must be updated. 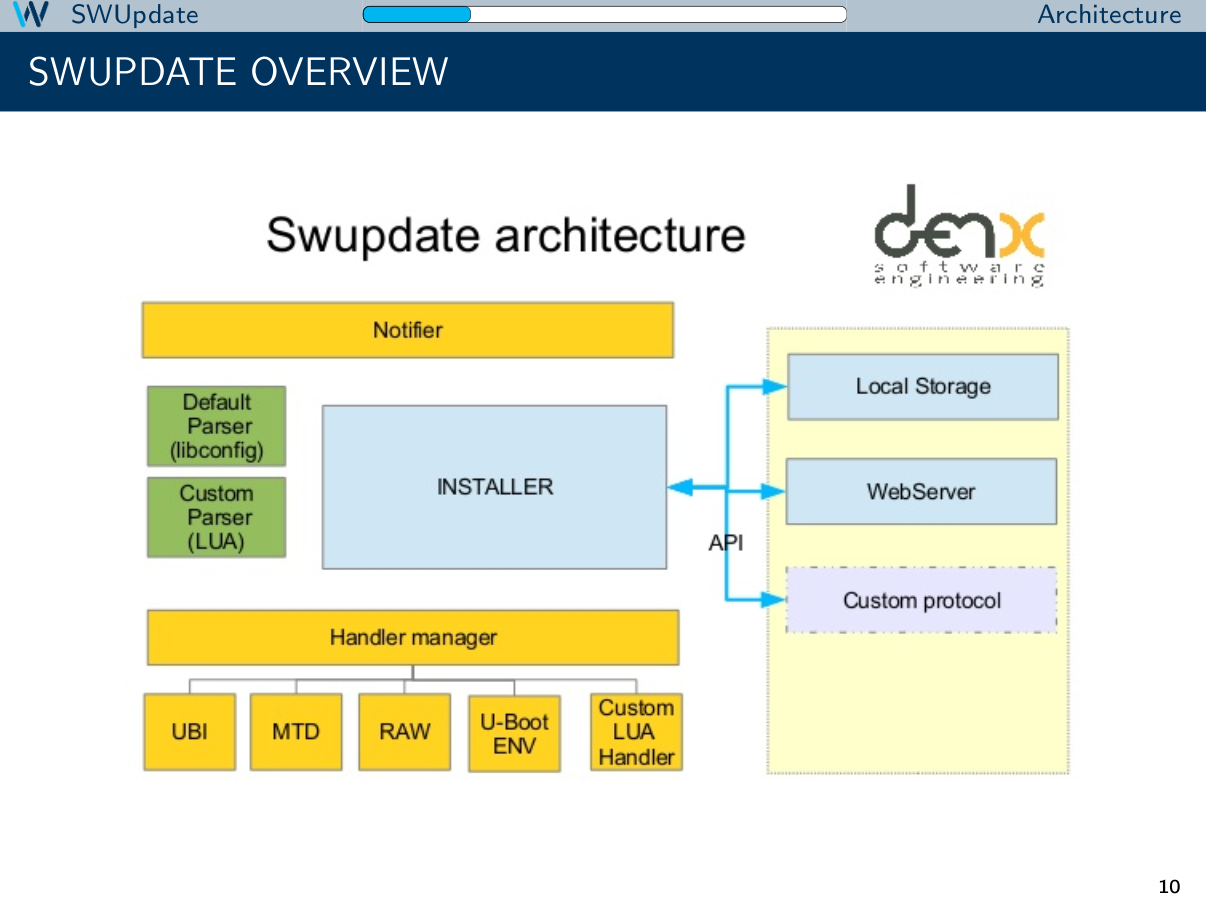 Many customizations can be done with this tool as it is provided with the classic menuconfig configuration tool. One great thing is that this tool is supported by Yocto Project and Buildroot so it can be easily tested.

Do not hesitate to have a look to his slides, the video of his talk or directly test SWUpdate!

Khem Raj from Comcast is a frequent speaker at the Embedded Linux Conference, and one of his strong fields of expertise is C compilers, especially LLVM/Clang and Gcc. His talk at this conference can interest anyone developing code in the C language, to know about optimizations that the compilers can use to improve the performance or size of generated binaries. See the video and slides. 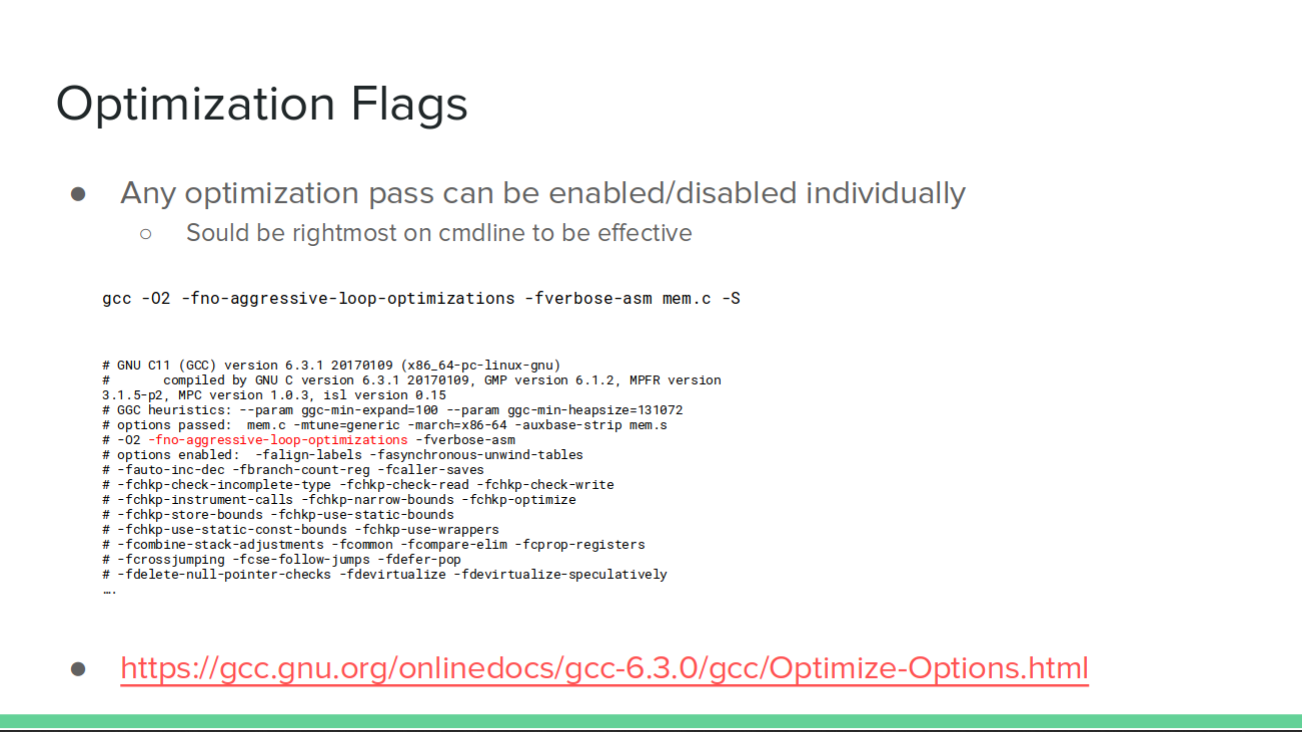 Another new optimization option is -Og, which is different from the traditional -g option. It still allows to produce code that can be debugged, but in a way that provides a reasonable level of runtime performance.

On the performance side, he also recalled the Feedback-Directed Optimizations (FDO), already covered in earlier Embedded Linux Conferences, which can be used to feed the compiler with profiler statistics about code branches. The compiler can use such information to optimize branches which are the more frequent at run-time.

Khem’s last advise was not to optimize too early, and first make sure you do your debugging and profiling work first, as heavily optimized code can be very difficult to debug. Therefore, optimizations are for well-proven code only.

Note that Khem also gave a similar talk in the IoT track for the conference, which was more focused on bare-metal code optimization code and portability: “Optimizing C for microcontrollers” (slides, video).

This talk was about the journey of a new comer in the mainline kernel community to fix the DisplayPort support in Intel i915 DRM driver. It first presented what happens from the moment we plug a cable in a monitor until we actually see an image, then where the driver is in the kernel: in the DRM subsystem, between the hardware (an Intel Integrated Graphics device) and the libdrm userspace library on which userspace applications such as the X server rely.

The bug to fix was that case when the driver would fail after updating to the requested resolution for a DP link. The other existing drivers usually fail before updating the resolution, so Manasi had to add a way to tell the userspace the DP link failed after updating the resolution. Such addition would be useless without applications using this new information, therefore she had to work with their developers to make the applications behave correctly when reading this important information.

With a working set of patches, she thought she had done most of the work with only the upstreaming left and didn’t know it would take her many versions to make it upstream. She wished to have sent a first version of a driver for review earlier to save time over the whole development plus upstreaming process. She also had to make sure the changes in the userspace applications will be ready when the driver will be upstreamed.

The talk was a good introduction on how DisplayPort works and an excellent example on why involving the community even in early stages of the development process may be a good idea to quicken the overall driver development process by avoiding complete rewriting of some code parts when upstreaming is under way.

Stephen did a great talk about one thing that is often overlooked, and really shouldn’t: Timekeeping. He started by explaining the various timekeeping mechanisms, both in hardware and how Linux use them. That meant covering the counters, timers, the tick, the jiffies, and the various POSIX clocks, and detailing the various frameworks using them. He also explained the various bugs that might be encountered when having a too naive counter implementation for example, or using the wrong POSIX clock from an application.

Karim did a very good introduction to Android Things. His talk was a great overview of what this new OS from Google targeting embedded devices is, and where it comes from. He started by showing the history of Android, and he explained what this system brought to the embedded market. He then switched to the birth of Android Things; a reboot of Google’s strategy for connected devices. He finally gave an in depth explanation of the internals of this new OS, by comparing Android Things and Android, with lots of examples and demos.

Android Things replaces Brillo / Weave, and unlike its predecessor is built reusing available tools and services. It’s in fact a lightweight version of Android, with many services removed and a few additions like the PIO API to drive GPIO, I2C, PWM or UART controllers. A few services were replaced as well, most notably the launcher. The result is a not so big, but not so small, system that can run on headless devices to control various sensors; with an Android API for application developers.