We were kindly provided a copy of Embedded Linux Projects Using Yocto Project Cookbook, written by Alex González. It is available at Packt Publishing, either in an electronic format (DRM free) or printed.

It is written as a cookbook so it is a set of recipes that you can refer to and solve your immediate problems instead of reading it from cover to cover. While, as indicated by the title, the main topic is embedded development using Yocto Project, the book also includes generic embedded Linux tips, like debugging the kernel with ftrace or debugging a device tree from U-Boot.

The chapters cover the following topics:

The structure of the book makes it is easy to find the answers you are looking for and also explains the underlying concepts of the solution. It is definitively of good value once you start using Yocto Project.

Bootlin is also offering a Yocto Project and OpenEmbedded training course (detailed agenda) to help you start with your projects. If you’re interested, join one of the upcoming public training sessions, or order a session at your location! 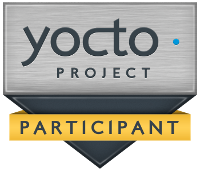 We have mainly contributed to the meta-fsl-arm and meta-fsl-arm-extra layers but we also have some contributions in OpenEmbedded Core and in the meta-ti layer.

Bootlin offers a Yocto Project and OpenEmbedded training course that we can deliver at your location, or that you can attend by joining one of our public sessions. Our engineers are also available to provide consulting and development services around the Yocto Project, to help you use this tool for your embedded Linux projects. Do not hesitate to contact us!

Bootlin engineers have worked since several months with Atmel engineers to prepare and submit the support for this new SoC to the mainline Linux kernel. We have actually submitted the patches on September, 11th, almost a month before the official release of the new chip! This means that most of the support for this new SoC will already be part of the upcoming 3.18 kernel release. Meanwhile, it is already possible to test it out by using the linux-next repository.

There are however a few pieces missing pieces to support all aspects of the chip:

The last big missing part is support for non-secure mode: for the moment, the system always runs in secure mode. Running the kernel in non-secure mode will require some more work but an initial version will probably be pushed during the next development cycle.

Besides this work on SAMA5D4 support ahead of its public release, Bootlin is also doing a lot of maintenance work on all the Atmel ARM platforms in the Linux kernel: migration to the Device Tree, to the clock framework, to several other new subsystems, etc. See the summary of our kernel contributions to 3.16, 3.15 and 3.14.

Through this work, the Bootlin engineering team has a very deep knowledge of the Linux support for Atmel ARM processors. Do not hesitate to contact us if you need help to bring up the bootloader or kernel on your custom Atmel ARM platform! It is also worth mentioning that Free-Electrons is part of the Atmel partner ecosystem.

We were kindly provided a copy of Embedded Linux Development with Yocto Project, written by Otavio Salvador and Daiane Angolini. It is available at Packt Publishing, either in an electronic format (DRM free) or printed.

This book will help you start with your embedded system development and integration using the Yocto Project or OpenEmbedded.

The first chapter sheds some light on the meaning of commonly misused names: Yocto Project, Poky, OpenEmbedded, BitBake. Then, it doesn’t waste time and explains how to install and use Poky to build and then run an image. The entire book is full of examples that can easily be tested, providing useful hands-on experience, using Yocto Project 1.6 (Poky 11).

Finally, there is a chapter dedicated to explaining how to generate and run an image on the Wandboard, an i.MX6 based community board.

The book is easy to read, with plenty of examples and useful tips. It requires some knowledge about generic embedded Linux system development (see our training) as only the Yocto Project specifics are covered. I would recommend it both for beginners wanting to learn about the Yocto Project and for developers wanting to improve their current knowledge and their recipes and also understand the BitBake internals.

Speaking of the Yocto Project, it is worth noting that Bootlin is now offering a Yocto Project and OpenEmbedded training course (detailed agenda). If you’re interested, join one of the upcoming public training sessions, or order a session at your location!