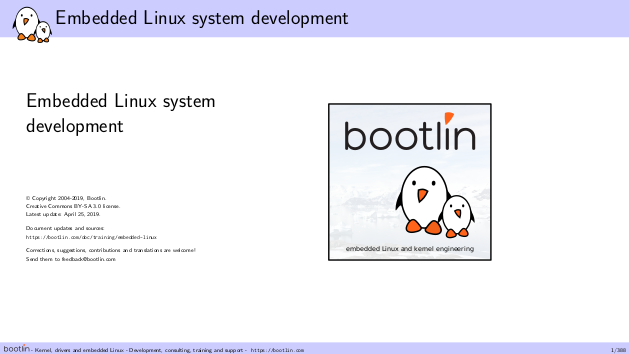 For many years, Bootlin has been offering an Embedded Linux system development training course, which has been delivered world-wide to hundreds of engineers by Bootlin trainers. This course is the most appropriate one for engineers getting started with embedded Linux: it goes through all the software layers of an embedded Linux system, from the toolchain to the application, through the bootloader, Linux kernel and basic user-space. With numerous hands-on labs, attendees get practical experience during this training, and learn how to build their embedded Linux system from the ground-up.

This course has been available for a while in two variants: 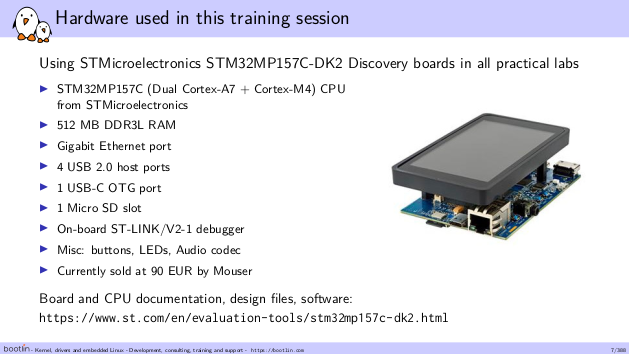 Today, we are happy to announce that all the practical labs of our 4-day variant are now done on the recently announced STM32MP157 Discovery board, which uses the STM32MP157 processor from STMicroelectronics. This processor has a number of interesting features for a large number of embedded applications, as we discussed in a previous blog post.

Just like for all our training courses, the training materials for this course are publicly and freely available:

Bootlin trainers are available to deliver this course on-site anywhere in the world. See this page for more details in terms of cost and registration process.

Earlier this year at Embedded World, STMicroelectronics announced the release of their first MPU, the STM32MP1 system-on-chip. Bootlin has been selected as one of the companies offering engineering and training services to be part of the ST Partners program around this new platform. In this blog post, we will give more details about STM32MP1 and Bootlin’s initial efforts on this platform.

For the past several years, STMicroelectronics has developed a range of 32-bit microcontrollers based on the ARM Cortex-M cores. The most high-end ones, based on Cortex-M4 and M7, were powerful enough to run a Linux operating system with external RAM attached, and ST has been very active in adding support for these micro-controllers in the upstream U-Boot and Linux projects. However, the Cortex-M4 and M7 being MMU-less processor cores, Linux could work only with a number of limitations, preventing from using some complex Linux software stacks.

With the STM32MP1, ST is now offering a full-featured microprocessor, based on the combination of one or two Cortex-A7 cores (650 Mhz), one Cortex-M4 core (209 Mhz) and a wide variety of peripherals. The STM32MP1 is currently available in 3 variants:

The hardware blocks integrated in the STM32MP1 offers a large amount of features and connectivity options:

This combination of a wide range of connectivity options, graphics support with GPU support, and a Cortex-M4 for real-time logic, makes the STM32MP1 interesting for a large number of applications.

Software support for the STM32MP1

Bootlin being a consulting company specialized in low-level Linux software for embedded platforms, it is obviously a key aspect we looked at for the STM32MP1 platform.

Then, even before the STM32MP1 product was publicly announced, a significant number of ST engineers had already started contributing to upstream TF-A, U-Boot and Linux the support for various pieces needed for the STM32MP1. Even if the support is not entirely upstream at this point, this strategy of starting the upstreaming effort ahead of the product announcement is very good.

Even though the work towards open-source GPU support has tremendously progressed over the past years, GPUs were notoriously known for being difficult to support in a fully open-source software stack. It is interesting to see that ST has chosen the GPU from Vivante for this STM32MP1, as Vivante is one of the first embedded GPU supported by Mesa, the open-source OpenGL implementation. Vivante GPUs are already used in a number of other SoCs, especially from NXP, and the Vivante open-source support, called etnaviv has therefore already seen some significant usage in production.

Until all the support for the STM32MP1 is fully upstreamed, ST provides publicly available Git repositories for all pieces of the software stack:

In addition to the availability of the code, there is also plenty of documentation available in the Development zone of the STM32 MPU wiki.

Hardware platforms for the STM32MP1

ST also provides some more feature-complete evaluation boards: the STM32MP157A-EV1 and STM32MP157C-EV1, which only differ by the lack or availability of secure boot support. They offer more hardware features than the Discovery platforms, and are obviously available at a higher cost, $399.

In addition to these platforms provided by ST, several manufacturers have already announced a number of boards or system-on-module based on the STM32MP1:

Bootlin is proud to have been chosen by ST to be part of its partner program when the STM32MP1 platform was announced. As a software partner, Bootlin can offer its training and engineering services to customers using the STM32MP1. We can provide:

As a ST partner, Bootlin will be porting two of its existing training courses to the STM32MP1 platform: this means that all the practical labs in those courses will take place on the STM23MP157 Discovery board. We will soon be announcing:

Building a Linux system for STM32MP1

The STM32MP1 being the first micro-processor in this family of SoCs from ST, a number of companies will most likely migrate from a micro-controller environment to a micro-processor one. This means moving from a situation where only a bare-metal application or a simple RTOS is used, to a situation where a feature-rich operating system such as Linux is being used. This migration is not always trivial as it requires gaining a lot of knowledge about U-Boot, the Linux kernel, Linux system integration and development, and more.

In order to help with this, in addition to the training courses described above, we will soon start publishing a series of blog posts that describe step by step how to build a Linux system for the STM32MP157 Discovery Kit, all the way up to reading data from an I2C sensor, and displaying them in a Qt5 based application. Stay tuned on our blog for those articles in the next few weeks!