As we announced recently, we are going to publish a series of blost post that describes how to build an embedded Linux device based on the STM32MP1 platform, using the Buildroot build system. In this first article, we are going to see how to create a basic Linux system, with minimal functionality. The hardware platform used in these articles is the STM32MP157-DK2.

A Linux system is composed of a potentially large number of software components coming from different sources:

In order to assemble a Linux system with all those software components, one typically has two main choices:

In this series of blog post, we have chosen to use Buildroot, which is an easy-to-use build system, which is a good match for engineers getting started with embedded Linux. For more general details about Buildroot, you can read the freely available training materials of our Embedded Linux development with Buildroot training course.

Buildroot is a set of Makefiles and script that automates the process of download the source code of the different software components, extract them, configure them, build them and install them. It ultimately generates a system image that is ready to be flashed, and which typically contains the bootloader, the Linux kernel image and the root filesystem. It is important to understand that Buildroot itself does not contain the source code for Linux, U-Boot or any other component: it is only a set of scripts/recipes that describes where to download the source code from, and how to build it.

Building the minimal system with Buildroot

Let’s started by getting the source of Buildroot from its upstream Git repository:

The 2019.02/stm32mp157-dk branch in your author’s Buildroot Git repository is based on upstream Buildroot 2019.02.x branch and contains 4 additional patches needed to support the STM32MP157-DK2 platform.

Let’s continue by telling Buildroot to load the pre-defined configuration for the STM32MP157-DK2:

We could start the build right away, as this configuration works fine, but to illustrate how to modify the configuration (and speed up the build!) we will adjust one aspect of the system configuration. To do so, let’s run Buildroot’s menuconfig. People who have already configured the Linux kernel should be familiar with the tool, as it is the exact same configuration utility.

At this point, if the command fails due to the ncurses library being missing, make sure to install the libcnurses-dev or ncurses-devel package on your Linux distribution (the exact package name depends on the distribution you’re using).

Exit menuconfig and save the configuration. It is now time to start the build by running make. However, your author generally likes to keep the output of the build in a log file, using the following incantation:

Now that Buildroot starts by checking if your system has a number of required packages installed, and will abort if not. Please follow section System requirements > Mandatory packages of the Buildroot manual to install all the appropriate dependencies. Restart the make command once all dependencies have been installed.

The build process took 10 minutes on your author’s machine. All the build output is conveniently grouped in the sub-directory named output/, in which the most important results are in output/images/:

Flashing and testing the system

Of course, make sure that, on your system, the microSD card is really identified as /dev/mmcblk0. And beware that all the data on your microSD card will be lost!

Connect a USB to micro-USB cable between your PC and the connector labeled ST-LINK CN11 on the board. A device called /dev/ttyACM0 will appear on your PC, through which you’ll be able to access the board’s serial port. Install and run a serial port communication program on your PC, your author’s favorite is the very minimalistic picocom:

Finally, power up the board by connecting a USB-C cable to connector PWR_IN CN6. You should then see a number of messages on the serial port, all the way up to Buildroot login:. You can then login with the root user, no password will be requested. 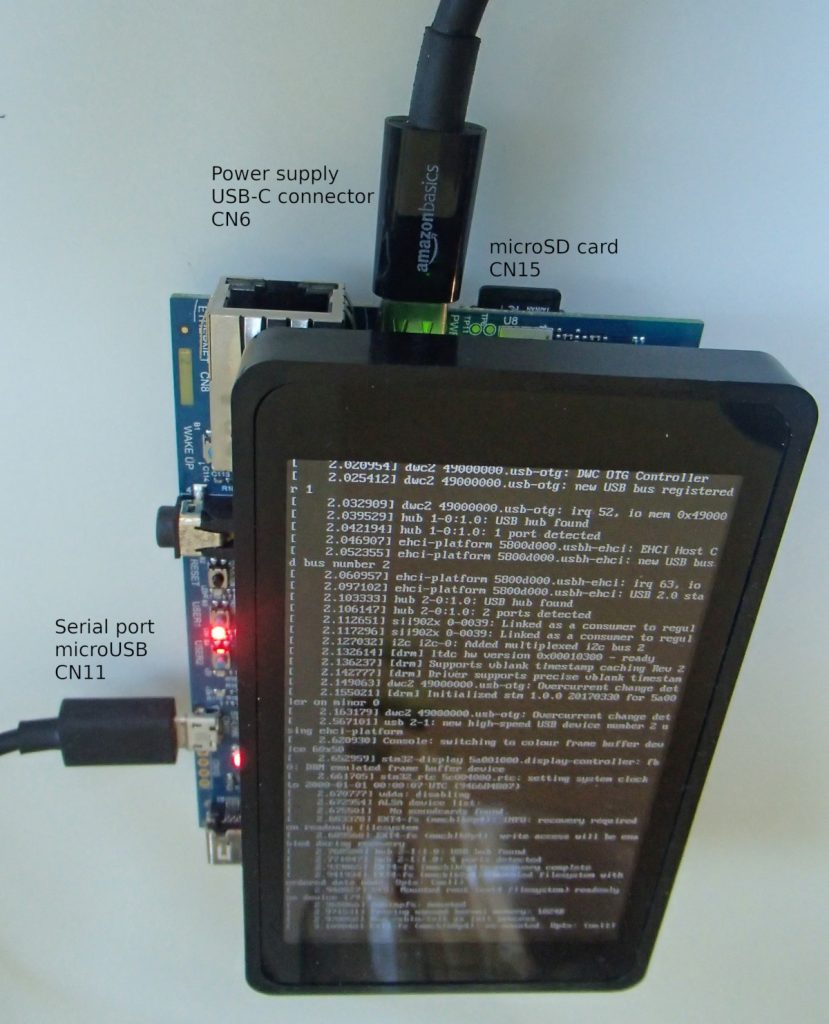 How is the system booting ?

Let’s look at the main steps of the boot process, by studying the boot log visible on the serial port:

These messages are printed by the second stage bootloader: we see it is loading the Linux kernel image (file zImage) and the Device Tree Blob describing our hardware platform (file stm32mp157c-dk2.dtb). It indicates that U-Boot has loaded both files into memory: it is now ready to start the Linux kernel.

This is the last message printed by U-Boot before jumping into the kernel.

And immediately after that, we have the first messages of the Linux kernel, showing the version of Linux and the date/time it was built. Numerous other kernel messages are then displayed, until:

This message indicates that the kernel has mounted the root filesystem. After this point, the kernel will start the first user-space process, so the next messages are user-space services being initialized:

Until we reach a login prompt.

After logging in as root, you have access to a regular Linux shell, with most basic Linux commands available. You can run ps to see the processes, run ls / to see the contents of the root filesystem, etc.

You can also play a bit with the hardware, for example to turn on and off one of the LEDs of the board:

So far, we have used a pre-defined Buildroot configuration, without really understanding what it does and how it built this basic system for our board. So let’s go back in make menuconfig and see how Buildroot was configured.

In the Target options menu, obviously the ARM Little Endian architecture was chosen, and more specifically Cortex-A7 was chosen as the Target Architecture Variant. Indeed the entire Linux system runs on the Cortex-A7 cores.

In the Build options menu, nothing was changed from the default values.

In the Toolchain menu, we previously modified to use an External toolchain to use a pre-existing cross-compiler and save on build time. All other options were kept as their default.

In the System configuration menu, we defined the following things:

In the Kernel menu, we have obviously configured which Linux kernel version and configuration should be used:

In the Target packages menu, we have kept the default: only the BusyBox package is enabled. BusyBox is a very popular tool in the embedded Linux ecosystem: it provides a lightweight replacement for a Linux shell and most common Linux command line tools (cp, mv, ls, vi, wget, tar, and more). Our basic system in fact only contains BusyBox!

In the Filesystem images menu, we have enabled the ext2/3/4 root filesystem type and chosen the ext4 variant. As explained above, ext4 is kind of the de-facto standard Linux filesystem for block storage devices such as SD cards.

In the Bootloaders menu, we enabled U-Boot, where a significant number of options need to be tweaked:

Finally, in the Host utilities menu, we enable the host genimage package.

What happens during the Buildroot build?

With all these options in place, here is what Buildroot has done to build our system (we have omitted some intermediate steps or package dependencies for the sake of brievity):

Let’s now have a look at the file board/stmicroelectronics/stm32mp157-dk/genimage.cfg, which tells the genimage utility how to create the final SD card image:

What this file says is:

This last partition is marked bootable. This is important because the U-Boot configuration for the STM32MP157 hardware platform by default uses the U-Boot Generic Distro Concept. At boot, U-Boot will search for the partition marked bootable, and then inside the filesystem contained in this partition, look for the file /boot/extlinux/extlinux.conf to know how to boot the system.

So, if we summarize the boot process of our hardware platform with those new details in mind, it looks like this:

You can find the exact Buildroot source code used to reproduce the system used in this article in the branch at 2019.02/stm32mp157-dk-blog-1.

Stay tuned for the next blog post, during which we will learn how to plug an additional device to the board: a pressure, temperature and humdity sensor connected over I2C, and how to make it work with Linux.

97 thoughts on “Building a Linux system for the STM32MP1: basic system”