The Linux Test Project is a project that develops and maintains a large test suite that helps validating the reliability, robustness and stability of the Linux kernel and related features. LTP has been mainly developed by companies such as IBM, Cisco, Fujitsu, SUSE, RedHat, with a focus on desktop distributions.

On the embedded side, both the openembedded-core Yocto layer and Buildroot have packages that allow to use LTP on embedded targets. However, for a recent project, we practically tried to run the full LTP test suite on an i.MX8 based platform running a Linux system built with Yocto. It turned out that LTP was apparently not very often tested on Busybox-based embedded systems, and we faced a number of issues. In addition to reporting various bugs/issues to the upstream LTP project, we also contributed a number of fixes and improvements:

Our contributions received a very warm welcome in the LTP community, which turned out to be very open and responsive. We hope that these contributions will encourage others to use LTP, and hopefully to make sure it continues to work on embedded platforms.

At the time of this writing, LTP has more than 3800 tests written by the community, including about 1000 network-related tests. The tests are grouped together in categories described by files in the runtest/ folder. Based on this, two scenarios of tests are defined: default and network which are described by two files in the scenario_groups/ folder. These two scenarios simply list the categories of tests that need to be executed.

Here are the contents of the default and network:

Once you have LTP built and installed on your board thanks to the appropriate OpenEmbedded or Buildroot package, you can run these two scenarios of test with the following commands (-n specify the network one):

Then take a look at the content of the result and the output directories.

For more information on building or running LTP please read this readme.

Since April 2016, we have our own automated testing infrastructure to validate the Linux kernel on a large number of hardware platforms. We use this infrastructure to contribute to the KernelCI project, which tests every day the Linux kernel. However, the tests being done by KernelCI are really basic: it’s mostly booting a basic Linux system and checking that it reaches a shell prompt.

However, LAVA, the software component at the core of this testing infrastructure, can do a lot more than just basic tests.

The need for custom tests

With some of our engineers being Linux maintainers and given all the platforms we need to maintain for our customers, being able to automatically test specific features beyond a simple boot test was a very interesting goal.

In addition, manually testing a kernel change on a large number of hardware platforms can be really tedious. Being able to quickly send test jobs that will use an image you built on your machine can be a great advantage when you have some new code in development that affects more than one board.

We identified two main use cases for custom tests: 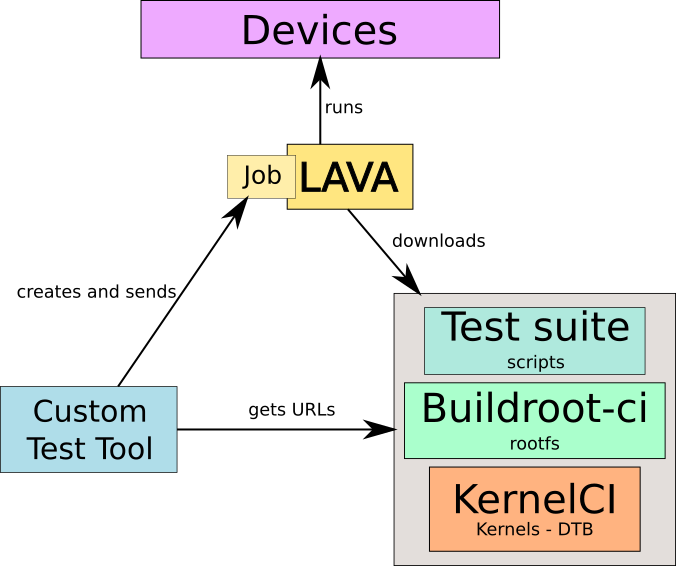 When it comes to test specific drivers, dedicated testing, validation or benchmarking tools are sometimes needed. For example, for storage device testing, bonnie++ can be used, while iperf is nice for networking testing. As the default root filesystem used by KernelCI is really minimalist, we need to build our owns, one for each architecture we want to test.

Buildroot is a simple yet efficient tool to generate root filesystems, it is also used by KernelCI to build their minimalist root filesystems. We chose to use it and made custom configuration files to match our needs.

We ended up with custom rootfs built for ARMv4, ARMv5, ARMv7, and ARMv8, that embed for now Bonnie++, iperf, ping (not the Busybox implementation) and other tiny tools that aren’t included in the default Buildroot configuration.

Our Buildroot fork that includes our custom configurations is available as the buildroot-ci Github project (branch ci).

The custom test tool is the tool that binds the different elements of the overall architecture together.

One of the main features of the tool is to send jobs. Jobs are text files used by LAVA to know what to do with which device. As they are described in LAVA as YAML files (in the version 2 of the API), it is easy to use templates to generate them based on a single model. Some information is quite static such as the device tree name for a given board or the rootfs version to use, but other details change for every job such as the kernel to use or which test to run.

The entry point of the tool is ctt.py, which allows to create new jobs, providing a lot of options to define the various aspects of the job (kernel, Device Tree, root filesystem, test, etc.).

This tool is written in Python, and lives in the custom_tests_tool Github project.

The test suite is a set of shell scripts that perform tests returning 0 or 1 depending on the result. This test suite is included inside the root filesystem by LAVA as part of a preparation step for each job.

We currently have a small set of tests:

All those tests only require the target hardware platform itself. However, for more elaborate network tests, we needed to get two devices to interact with each other: the target hardware platform and a reference PC platform. For this, we use the LAVA MultiNode API. It allows to have a test that spans multiple devices, which we use to perform multiple iperf sessions to benchmark the bandwidth. This test has therefore one part running on the target device (network-board) and one part running on the reference PC platform (network-laptop).

Our current test suite is available as the test_suite Github project. It is obviously limited to just a few tests for now, we hope to extend the tests in the near future.

As previously stated, it’s important for us to know about regressions introduced in the upstream kernel. Therefore, we have set up a simple daily cron job that:

The custom test tool ctt.py has a simple command line interface. It’s easy for someone to set it up and send custom jobs. For example:

will start the network test on the BeagleBone Black, using the latest mainline Linux kernel built by KernelCI. On the other hand:

will run the mmc test on the Marvell Armada 7040 and Armada 8040 development boards, using the locally built kernel image and Device Tree.

The result of the job is sent over e-mail when the test has completed.

Thanks to this custom test tool, we now have an infrastructure that leverages our existing lab and LAVA instance to execute more advanced tests. Our goal is now to increase the coverage, by adding more tests, and run them on more devices. Of course, we welcome feedback and contributions!