Two weeks ago, we submitted the initial support for the Marvell Armada 3700, which was the first ARM64 platform that Bootlin engineers contributed to the upstream Linux kernel.

The Armada 7K and 8K also use a fairly unique architecture, internally they are composed of several components:

All in all, this gives the following combinations:

So far, we submitted initial support only for the AP806 part of the chip, with the following patch series:

We will continue to submit more and more patches to support other features of the Armada 7K and 8K processors in the near future.

Over the last years, Bootlin has become a strong participant to the Linux ARM kernel community, with our engineers upstreaming support for numerous ARM 32 bits platforms.

Now, with ARM64 becoming more and more mainstream, our focus in 2016 will shift towards this architecture, and we’re happy to announce that we have recently contributed to the upstream Linux kernel the initial support for our first ARM64 architecture: the Marvell Armada 3700.

So far, we have sent a patch series adding minimal support for this platform:

A second version of the patch series was sent a few days later, in order to address comments received during the review.

It is worth mentioning that this SoC was publicly announced in a press release on January 6 2016, and we’ve been able to send the initial support patches on February 2, 2016, less than a month later.

We’ll be progressively submitting support for all the other hardware blocks of the Armada 3700, and also be announcing soon our development efforts on several other ARM64 platforms. 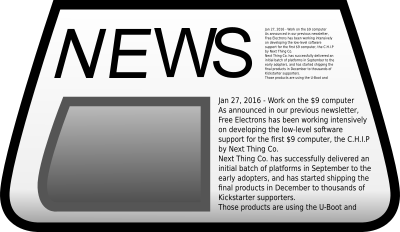