After several months, it’s time to resume our series of blog posts about building a Linux system for the STM32MP1 platform. After showing how to build a minimal Linux system for the STM32MP157 platform, how to connect and use an I2C based pressure/temperature/humidity sensor and how to integrate Qt5 in our system, how to set up a development environment to write our own Qt5 application and how to develop a Qt5 application, we will now cover the topic of factory flashing.

What is factory flashing ?

However, an actual product will most likely use some form of non-removable persistent storage, typically an eMMC or a NAND flash. While not available on the STM32MP1-DK1 board probably for cost reasons, these storage devices are very common in most embedded systems. For example, the STM32MP157A-EV1 board provides three non-removable persistent storage devices: a 4 GB eMMC, a 1 GB NAND flash, and a 64 MB QSPI NOR flash.

When such storage devices are shipped by their manufacturer, they are typically empty. Therefore, as part of the manufacturing process of your embedded systems, you will have to load the relevant storage device with your Linux system, applications and data, so that the embedded system is fully operational: this is the process referred to as factory flashing in this blog post.

If you are doing a very high volume product, you can ask your eMMC or NAND flash vendor to pre-load a system image on the storage before it is shipped to you and assembled on your board. However, many companies do products with volumes that are not large enough to make such a strategy possible: in this case, you really receive an empty storage device, and have to flash it.

However, most system-on-chips, including the STM32MP1 include some ROM code that the processor executes at boot time, even before it loads the first stage bootloader. This ROM code is primarly responsible for loading the first stage bootloader into memory, but it also very often offers a communication channel with the outside world, which can be used to gain control of a platform that has nothing at all on its storage. This communication channel is typically over USB or UART, and most often uses a custom, vendor-specific protocol, which is understood by vendor-specific tools. This protocol generally allows to send some code to the target and get it executed, which is sufficient to be able to reflash the target device.

Here are a few examples with system-on-chips from various vendors:

Obviously, in this blog post, we are going to use the latter, STM32 Cube Programmer, to flash our STM32MP1 platform. Since the DK2 board only has a removable device, we will use the tool to flash the SD card, but the process and logic would be the same for any other (non-removable) storage device.

Getting and installing STM32 Cube Programmer

While ST generally has very good upstream and open-source support for its products, the STM32 Cube Programmer unfortunately doesn’t follow this strategy: you need to be registered on the ST web site to download it, and its source code is not available. Due to this registration process, we for example cannot create a Buildroot package that would automatically download and install this tool for you.

Extract this ZIP file somewhere in your system, and then run the SetupSTM32CubeProgrammer-2.2.0.linux executable:

Got through the installation steps. On our system, we customized the installation path to be just $HOME/stm32cube, and the remainder of this blog post will assume this is where you installed the STM32 Cube Programmer.

In this blog post, we are only going to use the command line interface (CLI) of STM32 Cube Programmer, so just make sure you can run the corresponding tool:

Testing the communication with the board

Plug an additional USB-C cable from the board CN7 connector (which is located between the HDMI port and the 4 USB host ports). 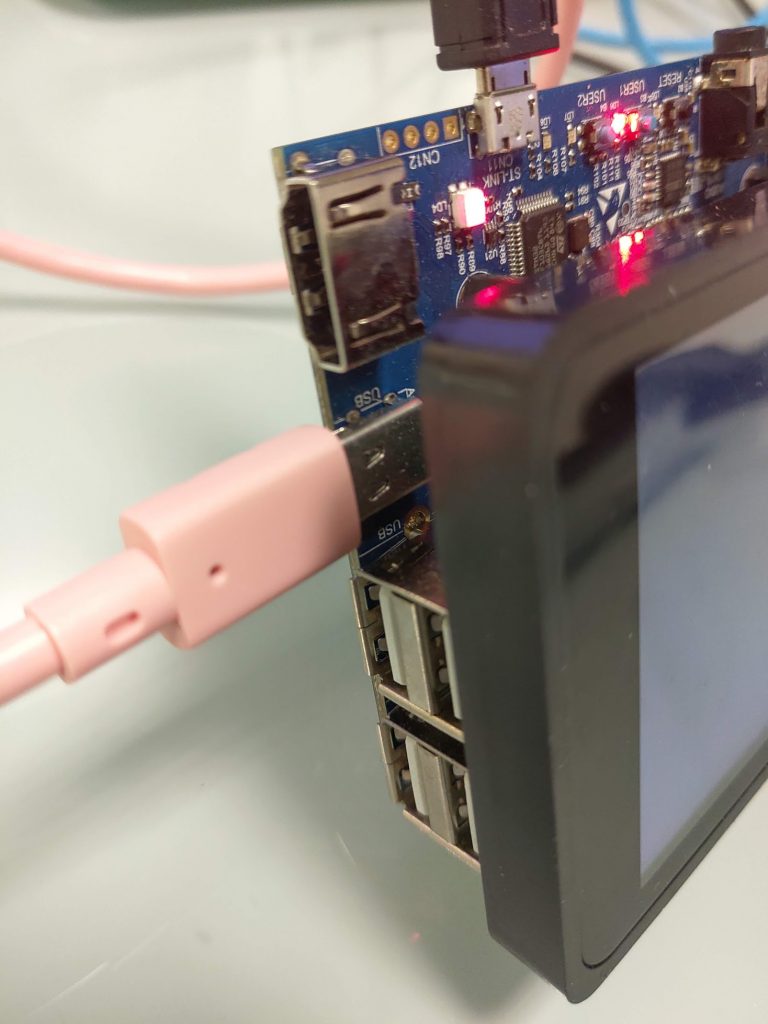 Then, reset the board. If you run lsusb on your Linux workstation, you should see a new device:

Then, you can ask STM32_Programmer_CLI to list the devices it sees over USB. This needs root permissions (unless appropriate udev rules are created):

Good, the STM32CubeProgrammer tool is seeing our board, and we see that the Device Index is USB1. Keep that in mind for the next steps.

STM32CubeProgrammer works by sending a U-Boot bootloader over USB, and then talking to this U-Boot to make it erase the MMC or NAND flash, and make it write some data to those storage devices. However, for some reason, STM32CubeProgrammer doesn’t work with the boot flow we have used so far, which uses the U-Boot SPL as the first-stage bootloader, and U-Boot itself as the second stage bootloader. It only works when the first stage bootloader is the Arm Trusted Firmware, also called TF-A. You can get more details about the different possible boot chains on STM32MP1 on this Wiki page.

Due to this constraint, we are going to switch our Buildroot configuration to use TF-A instead of U-Boot SPL as the first stage bootloader.

The second one will cause some minor conflict in boot/arm-trusted-firmware/Config.in. Resolve the conflict by removing the BR2_TARGET_ARM_TRUSTED_FIRMWARE_DEBUG option from this file, remove the conflict markers, then run:

If you’re not sure about this, you can check our 2019.02/stm32mp157-dk-blog-6 branch on Github, which has these changes already integrated.

Once done, we can run make menuconfig and start modifying the Buildroot configuration. Here are the changes that we need:

Overall, the diff of the changes in the configuration looks like this:

Before we can restart the build, we need to adjust the genimage.cfg file that describes the layout of the SD card. Indeed, the file name of the first stage bootloader is now tf-a-stm32mp157c-dk2.stm32 instead of u-boot-spl.stm32 and the file name of the second stage bootloader is now u-boot.stm32 instead of u-boot.img. All in all, your genimage.cfg file in board/stmicroelectronics/stm32mp157-dk/genimage.cfg should now look like this:

You should now have in output/images the new TF-A image tf-a-stm32mp157c-dk2.stm32 and the new U-Boot image u-boot.stm32. Of course the sdcard.img file has been updated.

Rather than updating our SD card on our workstation, we’ll directly use the STM32CubeProgrammer tool to do that, in the next section.

The STM32CubeProgrammer tool takes as input a flash layout file, which has a .tsv extension. The format of this file is extensively documented on this Wiki page. It is essentially a text file that says what should be flashed in each partition.

Let’s create a file board/stmicroelectronics/stm32mp157-dk/flash.tsv, with the following contents:

The first line is a comment, just to help remember what each field is about. The second and third lines tell STM32CubeProgrammer which bootloader images should be used as part of the flashing process. Finally, the last line says we want to flash sdcard.img as a raw image on the mmc0 device.

Then, go do output/images, and run STM32CubeProgrammer. We use the -c port=usb1 argument, because our board was detected as device USB1 when we enumerated all detected devices using the -l usb previously.

Finally, we can toggle back the SW1 DIP switches to their ON position, to boot again from SD card, and hit the reset button. The board should boot, but this time with our new image, which uses TF-A instead of U-Boot SPL, so the first lines of the boot process should look like this:

In this article, we have discussed the concept of factory flashing, understood better the different boot chains available for the STM32MP1, switched to a boot chain using TF-A, and presented how to use STM32CubeProgrammer to reflash the entire SD card.

As usual, we have a branch on Github with the Buildroot changes corresponding to this blog post, see the branch 2019.02/stm32mp157-dk-blog-6.

Stay tuned for the next article in this series of blog post, in which we will cover the topic of Over-The-Air firmware update.

38 thoughts on “Building a Linux system for the STM32MP1: implementing factory flashing”