After showing how to build a minimal Linux system for the STM32MP157 platform, and how to connect and use an I2C based pressure/temperature/humidity sensor, we are now going to enable Qt5 and run some example graphical Qt5 applications. This is a necessary requirement before developing our own Qt5 application, which will be the topic of the next article in this series.

Display support in the Linux kernel

First of all, it is very important to distinguish the display controller from the GPU, as many people getting started with embedded systems and Linux tend to confuse both, while they are completely different things, both in terms of functionality and software support.

A display controller is an hardware block that takes the content of a memory area containing values representing the color of all pixels on your screen (a framebuffer) and sends it out to a display panel over hardware interfaces such as HDMI, DisplayPort, parallel interfaces or MIPI DSI. Some display controllers can take several framebuffers as input and compose them, potentially rescaling the size of some of them, and overlaying them with transparency. For example, some display controllers can take a framebuffer containing video frames, overlay another framebuffer that contains transparent pixels (to see the video) and some other pixels showing the UI of a video player, and another framebuffer overlayed on top of the two other ones that contains the mouse cursor. There are no 3D rendering or OpenGL operations involved: a display controller’s job is purely about taking framebuffer(s) contents and showing them on a display.

A GPU (or Graphics Processing Unit) is a very flexible programmable hardware unit, which among other things can be used to implement the OpenGL 3D rendering API, but also other APIs such as OpenCL. OpenGL and a GPU allow to offload in hardware the complex calculations that need to be done to render a 3D scene into a framebuffer of pixels. But a GPU by itself is not responsible at all for displaying on a screen what was rendered: it is the responsibility of a display controller.

Some system-on-chips only have a display controller, and no GPU at all, so you can display contents on one or several display panels, but you cannot benefit from hardware acceleration for 3D rendering. There are also use-cases where GPUs are used, but never to render anything looking like a 3D scene: that is for example the use-case for the OpenCL API, which allows to leverage the processing power of GPUs for general purpose programming.

In Linux, both display controllers and GPUs are managed by a Linux kernel subsystem called DRM, for Direct Rendering Manager. The DRM drivers are located in drivers/gpu/drm in the Linux kernel source code. If the hardware also has a GPU in addition to the display controller, then the most significant part of handling the GPU is done in user-space libraries implementing OpenGL. In the open-source world, the de-facto standard OpenGL implementation is Mesa3D, which has support for a number of different GPUs. From a GPU driver perspective, the kernel mainly serves as a way for the user-space OpenGL library to allocate buffers and send commands to the GPU.

In addition, the display panel used on the STM32MP15 Discovery Kit is connected to the SoC using the MIPI DSI interface. The STM32MP15 SoC contains a DSI encoder hardware block from Synopsys, and a glue driver for the DSI encoder is available in drivers/gpu/drm/stm/dw_mipi_dsi-stm.c and can be enabled using the CONFIG_DRM_STM_DSI option.

It turns out that the kernel configuration file we’re using since our initial blog post does have both of these options enabled, as well as the option providing support for the specific DSI display panel used on the Discovery board:

The user-space interface of DRM is detailed in its documentation. Typical applications do not use directly this interface, and instead rely on a display stack in user-space such as X.org or Wayland, or directly on a graphical toolkit like Qt.

In addition, the DRM subsystem implements a compatibility layer that emulates the Linux framebuffer user-space interface, as documented in framebuffer.txt. This allows to support older applications/libraries that don’t use DRM directly.

In our case, we are going to use the Qt graphical toolkit, and on embedded Linux systems, it has four main display backends: eglfs (which requires an OpenGL/EGL graphics stack), linuxfb (which uses a simple legacy framebuffer interface), wayland (for Wayland, obviously) and xcb (for X.org). To keep things simple for this series and blog post, and because we don’t require OpenGL support, we will use the linuxfb backend.

The Linux kernel has a subsystem called input for all input devices, such as keyboards, mice, touchscreens, joysticks and more. Its user-space interface is described in details in the kernel documentation, and this interface is used by most display stacks in user-space. For example, Qt supports it through the backend called evdev.

In terms of hardware, the Discovery Kit display panel integrates a touch panel that uses a Focaltech FT6236 controller, connected over I2C. The Device Tree describes this touch panel device as follows:

The corresponding driver in the Linux kernel is drivers/input/touchscreen/edt-ft5x06.c, which can be enabled using the CONFIG_TOUCHSCREEN_EDT_FT5X06 kernel configuration option.

The input subsystem, its evdev interface, and the specific driver for our touch panel are all already enabled in the kernel configuration file we are using since our first blog post:

Basic testing of the display and touch panel

To test the touch panel and display, we can start with very simple tools instead of using directly a complex graphical stack. The tools we recommend to use are:

On the system, let’s have a look at available input device (output edited to fit in the blog post):

So input0 is our touch panel (connected on I2C bus 0, at address 0x2A), and event0 is its evdev user-space interface. This evdev interface is accessible through the /dev/input/event0 device file:

Now we can run evtest. With no arguments, it shows the list of available input devices, their name, and allows use to chose the one we would like to test:

Once evtest is running, press the touch panel, and you will see events reported like this:

These events show the coordinates of the press, and the actual press event (BTN_TOUCH).

With the touch panel working, let’s move on to the display. In fact, you know the display is already working: the fbcon kernel driver provides a console over the framebuffer, which is why you are seeing the Linux kernel messages on the screen. Nevertheless, let’s use the modetest program from libdrm. Without any argument, it just prints out some details about the available display hardware. First the encoders:

So the display controller has two encoders: one with a DPI interface (i.e parallel RGB interface) and one with a (MIPI) DSI interface.

We have a HDMI connector, which can be used with the encoder of id 28, that is the DPI encoder. Indeed, the RGB parallel interface of the STM32 processor is fed on the board into an HDMI transceiver, that goes out with HDMI signals on connector CN9. So from the point of view of the SoC, it is a parallel RGB interface, but thanks to the HDMI transceiver on the Discovery board, it is in fact usable as an HDMI connector.

The second connector is the DSI connector, which can be used with encoder of id 30, i.e the DSI encoder, which makes sense.

So let’s ask modetest to display its test picture on the DSI connector, which has id 31. The DSI panel resolution is 480×800, so we’ll use the following command: 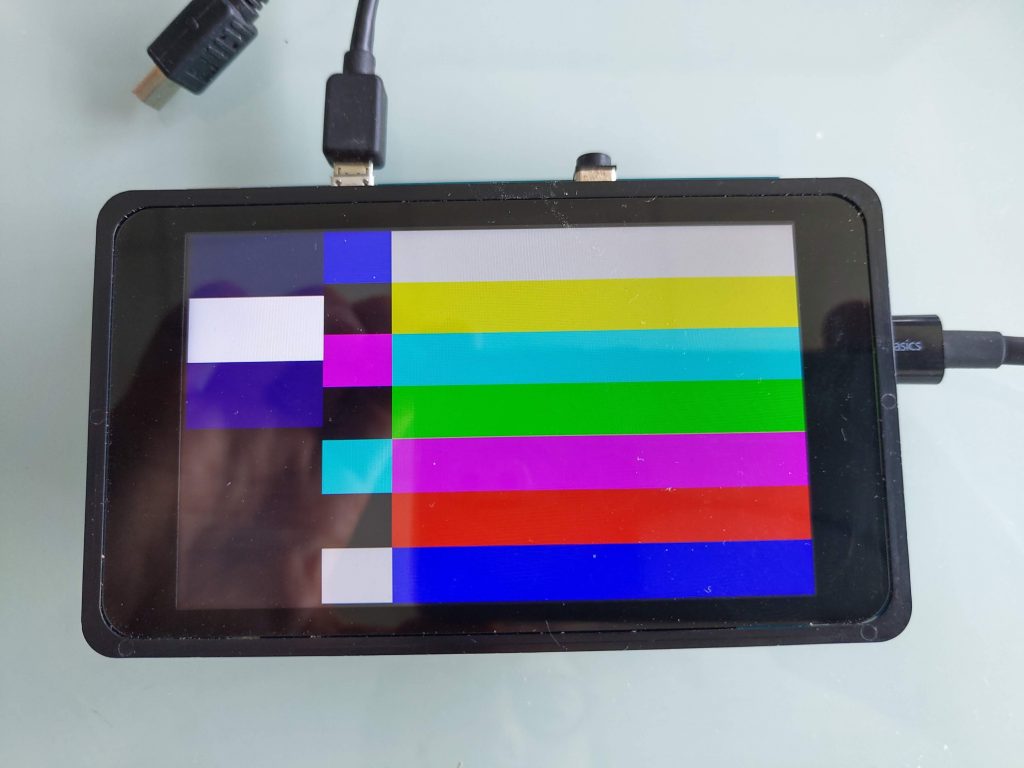 Now if we plug an HDMI screen to the HDMI connector, the modetest output about connector 29 changes as the connector is no longer disconnected:

Now that we have successfully tested the display and touchscreen, it is time to move on and use a powerful graphical toolkit for embedded Linux systems: Qt. Qt is already packaged in Buildroot, and therefore very easy to add to our system, including some examples. Simply enable the following options in your Buildroot configuration:

Once these options are enabled, restart the build with make and rewrite the new image to your SD card.

All the Qt examples are installed in /usr/lib/qt/examples/, so you can try all of them. Let’s start with the analogclock for example: 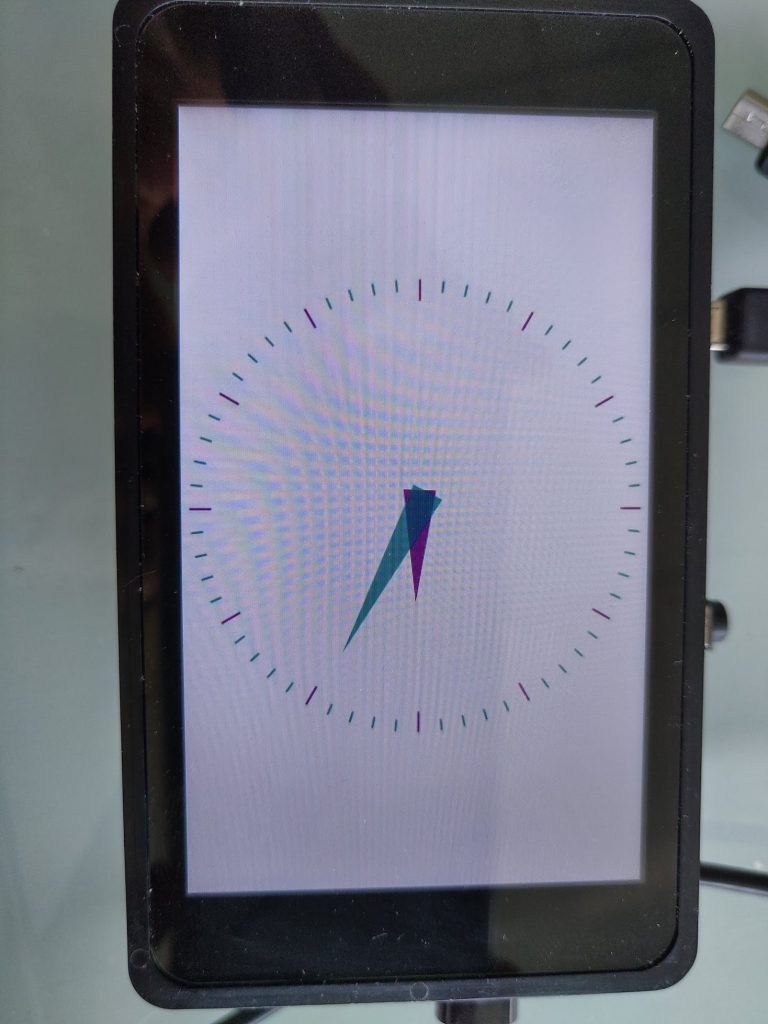 Then, another one which allows to test the touch panel: 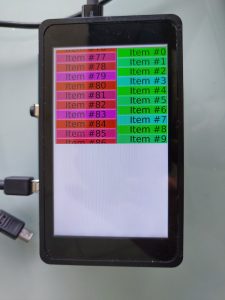 And a more “complete” and useful application, which as you can see does not fit very well on a 480×800 screen in portrait mode, but also allows to use the touchscreen: 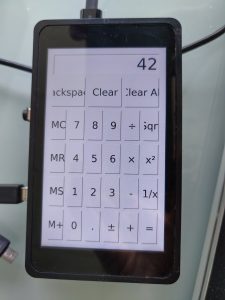 To conclude this article, let’s have a look at the size of our filesystem size. After a completely clean build (make clean all), Buildroot can generate a nice graph of the filesystem size using make graph-size. In our case, it generates the following graph: 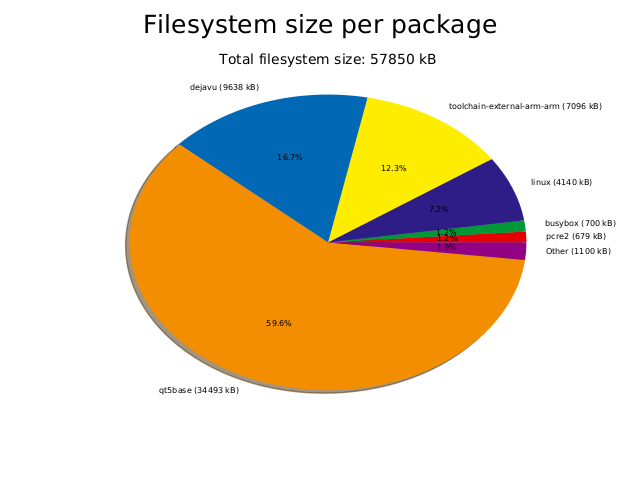 So the overall filesystem size is 58.7 MB, on which 34.4 MB come from Qt. But our Qt is compiled with examples, and the examples take up 16.7 MB (this is not visible on the graph, it was calculated by looking at the size of /usr/lib/qt/examples/) on the target). Also, the dejavu font package is quite large, with 9.6 MB.

You can find the exact Buildroot source code used to reproduce the system used in this article in the branch at 2019.02/stm32mp157-dk-blog-3.

In this article, we learned about how Linux manages display and input devices and how to test them with simple applications such as modetest and evtest. Then we looked at how to add the Qt library to our Buildroot configuration, and verify it is working using Qt example applications.

Our next blog post will cover how to build a real Qt application!

31 thoughts on “Building a Linux system for the STM32MP1: enabling Qt5 for graphical applications”