As expected with the time-based releases, Buildroot 2011.05 has been released just a few days ago. We have already published many blog posts about Buildroot, but to summarize for our new readers, Buildroot is a tool that automates and simplifies the process of building an embedded Linux system. You define your system configuration and components in a menuconfig/xconfig interface similar to the one the kernel uses, then hit make, wait a bit, and you have your embedded Linux system ready to run on your device. At Bootlin, we appreciate the simplicity of Buildroot, and many of our customers also appreciate it for the same reason. Of course, we also contribute significantly to Buildroot and we have started a commercial support offering on Buildroot.

The 2011.05 release cycle was a little bit more quiet than usual, so the number of new features or major changes is not as large as it was for past releases. Amongst the interesting things:

Buildroot in the Linux Journal 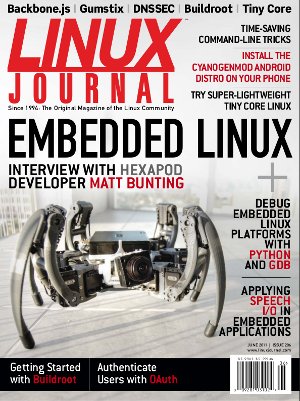 The Linux Journal has published an issue, numbered 206, dedicated to Embedded Linux. This issue has several articles around Embedded Linux related topics:

It is great to see articles about Buildroot in a such widely read magazine, and it should definitely help increasing the awareness about this build system.

In May, the famous developer Fabrice Bellard (known as the initial author of ffmpeg, qemu, but also for his records for the computation of pi) has released an impressive new project: an x86 emulator completely written in Javascript, which runs in a Web browser. This emulator is sufficiently capable and powerful to boot a Linux system. And the good news is that the Linux system that Fabrice Bellard is using for the demonstration was generated with Buildroot, as Bellard says in his technical notes about the project.