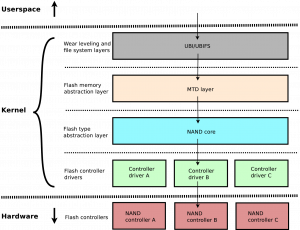 The NAND framework is the layer between the generic MTD layer and the NAND controller drivers. Its purpose is to handle MTD requests and transform them into understandable NAND operations the controller will have to send to the NAND chip.

For general information about NANDs, the reader is invited to read the ONFI specification (Open NAND Flash Interface) which defines the most common NAND operations.

Interacting with a NAND chip

Raw NANDs (so-called “parallel NANDs”) are slave devices waiting for instructions from the controller. An operation is a sequence of instructions usually referred as “command” (CMD), “addresses” (ADDR), and “data” cycles (DATA_IN/DATA_OUT) and sometimes wait periods (WAITRDY). Some everyday operations any NAND enthusiast should know by heart are, for instance:

How it was handled in the Linux kernel

Today, a majority of NAND controlller drivers implement the ->cmd_ctrl() hook. It aimed to be a very small function, designed to just send command and address cycles independently, usually embedding some very controller-specific logic. This hook was supposed to be called by a function of higher level from the NAND core, ->cmdfunc(). In addition to calling ->cmd_ctrl() to send command and address cycles, the core would also call ->read|write_byte|word|buf() hooks to actually move data from the NAND controller and the memory (the DATA parts in the diagram above).

This approach worked very well with simple NAND controllers, which are just able to send command and address cycles one at a time to the NAND chip, without any extra intelligence. However, NAND controllers have become more and more complex and now can handle higher-level operations, usually to provide higher performance. For example, a NAND controller may provide an operation that would do all of the command and address cycles of a read-page operation in one-go. Some controllers even support only those higher-level operations, and are not able to simply do the basic operation of sending one command cycle or one data cycle. To handle such controllers, their drivers were overloading the ->cmdfunc() hook directly, circumventing the generic NAND core implementation of ->cmdfunc(). This is a first drawback: it is no longer possible to easily add logic to the NAND core to support new NAND operations, because some drivers overload the ->cmdfunc() logic. Worse, ->cmdfunc() doesn’t provide some information such as the length of the data transfer, which some controllers actually need in order to run the desired operation. NAND controller drivers started to have complicated state machines just to work around the NAND framework limitations. 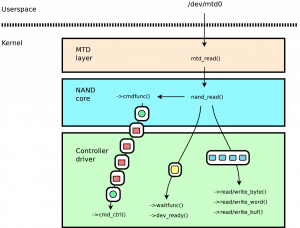 Some driver-specific implementations of this hook started diverging from the original one, giving maintainers a lot of pain to maintain the whole subsystem, specifically when they needed to introduce additional vendor-specific operations support. These implementations were not only diverse but also incomplete, sometimes buggy and most importantly, developers had to guess the data that would probably be moved by the core after that, which is clearly a symptom that the framework was not fitting the user needs anymore.

The NAND subsystem maintainers decided to switch to a new approach, based on a new hook called ->exec_op(), implemented by NAND controller drivers and called by the generic NAND core. The logic behind that name is to provide to every controller a generic interface that can easily be extended and exposes the overall NAND operation to be performed. This way, the driver can optimize depending on the controller capabilities without the need of a complex state machine as ->cmdfunc() was.

All major NAND generic raw operations like reset, reading the NAND ID, selecting a set of timings, reading/writing data and so on found their place into small internal functions named nand_[operation]_op().

From the NAND controller driver point of view, an array of instructions is received for each operation. The controller then needs to parse these instructions, decides if it can handle the overall operation, splits the operation if needed, and executes what is requested.

Using the ->exec_op() interface is as simple as declaring a list with the controller capabilities, each entry of this array having a callback function knowing the overall operation that will actually handle all the logic. The NAND core was enhanced with a proper parser that one may use in his driver to handle the callback selection logic. 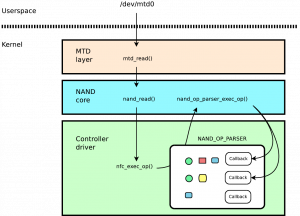 For a more complete overview, one can check the slides and the video of Miquèl’s presentation at FOSDEM about NAND flash memories and the introduction of ->exec_op() in the Linux kernel.

The ->exec_op() interface in the NAND core has been accepted and merged upstream, and will be part of Linux 4.16. The first driver converted to this new interface was obviously the NAND controller driver used on Marvell platforms, pxa3xx_nand. It has been rewritten as marvell_nand, and will also be part of Linux 4.16. Even though the new driver is longer (by lines of code) than the previous one, it supports additional features (such as raw read and write operations), allows the NAND core to pass custom commands to the NAND chip, and has a logic that is a lot less complicated.

Miquèl has also worked on converting the fsmc_nand driver to ->exec_op(), but this work hasn’t been merged yet. In the community, Stefan Agner has taken on the task to convert the vf610_nfc driver to this new approach.

Bootlin is proud to have contributed such enhancements to the Linux kernel, and hopes to see other developers contribute to this subsystem in the near future, by migrating their favorite NAND controller driver to ->exec_op()!