This week started off by submitting the fourth revision of the Sunxi-Cedrus VPU driver for review. Many improvements were squashed into this new version and the driver is closer than ever to being merged. With the media requests API in a nearly-ready state, things are really coming together on the kernel side.

On the userspace side, our standalone testing tool cedrus-frame-test received a number of improvements, starting with Maxime’s H264 work that was rebased and integrated in the master branch. Atomic modesetting support with DRM planes was also completed and merged. It allowed completing dma-buf support in the tool, implementing a zero-copy pipeline. With asynchronous page-flipping, performance is getting real good with only a few milliseconds required to schedule the flip and no buffer duplication involved!

Regarding integration with Kodi, we moved forward with the code using ffmpeg’s hwcontext for decoding with VAAPI and mapping from the VAAPI output to DRM, ending up through Kodi’s DRMMPrimeRenderer. The display pipeline is pretty much the same as cedrus-frame-test with atomic modesetting and dma-buf, only that Kodi uses an extra plane on top for displaying its controls and interface.

There are still some configuration issues to work on for display (and perhaps some kind of corruption happening on the display engine’s side), as illustrated on the following picture: 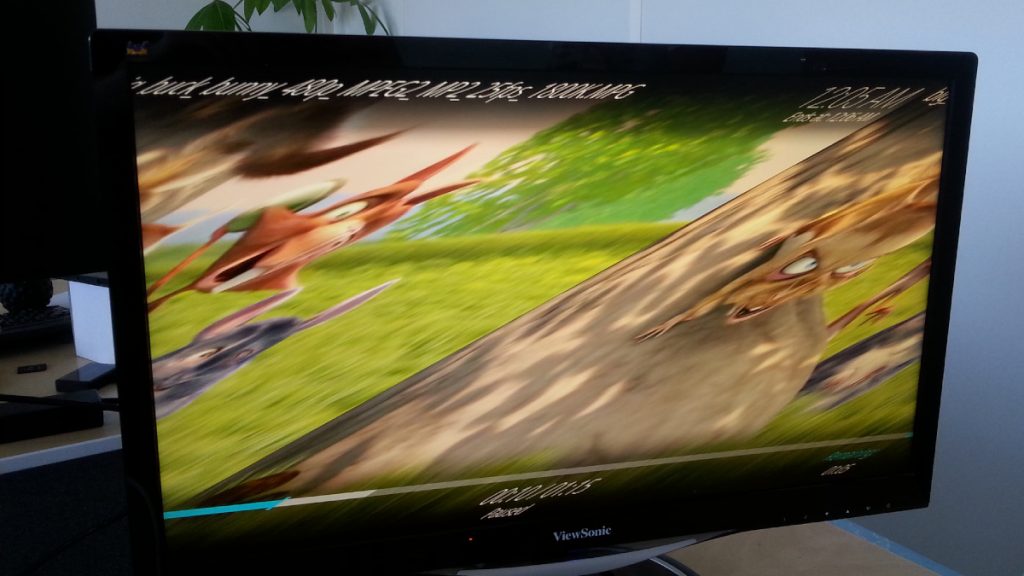 This week has seen some good H264 progress too! Our libva implementation has been tested, and while we encountered some VLC bugs that makes it drop the first few seconds, once passed that bug, every frame is decoded properly using a baseline profile H264 video. We’ve discussed with VLC developpers about this, and since it also affects the H264 software decoding, we will probably turn this into a bug report (and hopefully a bug fix!).

We therefore started to work on implementing the high profile support. We went back to the method we were using when first developping the baseline profile support: we dumped the registers access of the libvdpau-sunxi decoding the video on an Allwinner 3.4 kernel, and comparing the registers accesses we were doing. This is very early at this stage, so we don’t have much to show for now, but stay tuned for more news!