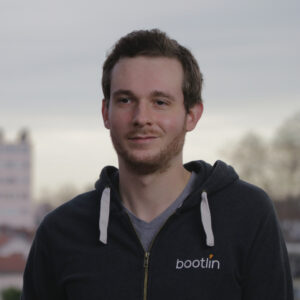 Paul is an embedded Linux engineer, who started at Bootlin as an intern in March 2018. He joined the company as a full-time engineer in fall 2018 after graduating from ENSEIRB-MATMECA, an engineering school in Bordeaux, France where he majored in electronics engineering with a specialization in embedded systems. During his internship, he worked on bringing support for the Allwinner VPU driver to mainline Linux.

As part of his internship, Paul worked extensively on the Cedrus driver for the VPU found on Allwinner platforms, a V4L2 driver using the M2M framework and Request API in the mainline Linux kernel. During that time, he also enabled a display pipeline for the VPU use case in the mainline DRM driver for Allwinner platforms. During a previous internship at the Intel Open Source Technology Center, he also worked on automated display testing with the IGT GPU Tools testing suite and the Chamelium hardware.

On his spare time, Paul also contributed a few changes to the kernel, adding basic support for a few OMAP mobile devices and fixing various issues for some ARM Chrome OS devices. He also had the occasion to deal with downstream vendor kernels used in mobile devices running Android.

On his spare time, Paul contributed to some boot-related software projects:

Over the years, Paul has contributed to various projects related to free software: