MACsec is an IEEE standard (IEEE 802.1AE) for MAC security, introduced in 2006. It defines a way to establish a protocol independent connection between two hosts with data confidentiality, authenticity and/or integrity, using GCM-AES-128. MACsec operates on the Ethernet layer and as such is a layer 2 protocol, which means it’s designed to secure traffic within a layer 2 network, including DHCP or ARP requests. It does not compete with other security solutions such as IPsec (layer 3) or TLS (layer 4), as all those solutions are used for their own specific use cases.

We have recently worked on enabling hardware offloading of MACsec operations on a Microsemi VSC8584 Ethernet PHY in Linux, by contributing support for MACsec offloading to the Linux networking stack. In this blog post, we present this work through an introduction to MACsec, details on the current state of MACsec support in Linux and finally our work to support MACsec hardware offloading.

MACsec uses its own frame format with its own EtherType (a 2-bytes field found in Ethernet frames to indicate what the protocol encapsulated in the payload is). As an example, when encapsulating an IPv4 frame, we would have Ethernet<MACsec<IPv4 instead of Ethernet<IPv4. 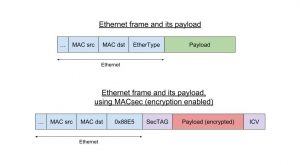 Within each secure channel, security associations are described. They are identified by an association number and define the encryption/decryption keys used and the current packet number, which is used for replay protection.

Linux has a software implementation of MACsec, found at drivers/net/macsec.c, which was introduced by Red Hat engineer Sabrina Dubroca in 2016 and available since Linux 4.5. The support is implemented as full virtual network devices, on per transmit secure channel, attached to a parent network device. The parent interface only sees raw packets, which are in the MACsec case raw Ethernet packets with protected or encrypted content. This design is very similar to other supported protocols in Linux such as VLANs.

MACsec support was also introduced in iproute2, a collection of utilities aiming at configuring various networking parts of the kernel (interfaces management, IP configuration, routes…). The command to use is ip macsec.

If we were to configure a secure channel between two hosts we would first need to create a virtual MACsec interface (representing a transmit secure channel) on both hosts, on top of a physical network interface. Let’s say we use eth0 on both our hosts (Alice and Bob), and we want to encrypt the MACsec traffic:

The next step would be to configure matching receiving secure channel on both hosts:

We would then configure the transmit channels, and for each we would need to generate a key:

We finally need to configure the receive channels, so that the hosts can authenticate and decrypt packets:

Once all of the MACsec configuration is done we would be able to exchange traffic between Alice and Bob, using authenticated and encrypted packets:

There are hardware devices featuring a MACsec transformation implementation which can be used to offload the frame generation and encryption / authentication of MACsec frames (for both ingress and egress frames). The benefit of hardware offloading is to discharge the CPU from doing certain operations (in our case MACsec transformations) by doing them in a dedicated hardware engine, which may or may not provide better performance. The idea is essentially to free the CPU from being used by a single application so that the system in its whole runs better.

We then worked on implementing a MACsec specific helper in a networking PHY driver : the Microsemi VSC8584 Ethernet PHY. This PHY has a MACsec engine which can be used to match flows and to perform MACsec transformations and operations. When configured packets can be encrypted and decrypted, protected and validated, without the CPU intervention.

We recently sent a first version of patch series to the Linux network mailing list, which is currently being discussed. This series of patches introduces both the hardware offloading support for MACsec and the ability to offload MACsec operations to a first hardware engine. We hope support for other MACsec engines will come after!