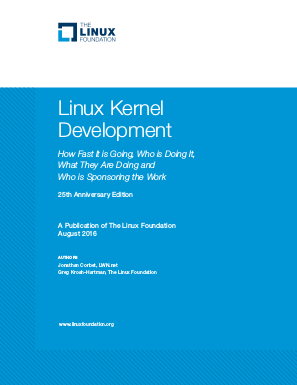 Lask week, the Linux Foundation announced the publication of the 2016 edition of its usual report “Linux Kernel Development – How Fast It is Going, Who is Doing It, What They are Doing, and Who is Sponsoring It”.

This report gives a nice overview of the evolution of the Linux kernel since 3.18, especially from a contribution point of view: the rate of changes, who is contributing, are there new developers joining, etc.

Bootlin is mentioned in several places in this report. First of all, even though Bootlin is a consulting company, it is shown individually rather than part of the general “consultants” category. As the report explains:

The category “consultants” represents developers who contribute to the kernel as a work-for-hire effort from different companies. Some consultant companies, such as Bootlin and Pengutronix, are shown individually as their contributions are a significant number.

Thanks to being mentioned separately from the “consultants” category, the report also shows that: