For all embedded Linux developers, cross-compilation toolchains are part of the basic tool set, as they allow to build code for a specific CPU architecture and debug it. Until a few years ago, CodeSourcery was providing a lot of high quality pre-compiled toolchains for a wide range of architectures, but has progressively stopped doing so. Linaro provides some freely available toolchains, but only targetting ARM and AArch64. kernel.org has a set of pre-built toolchains for a wider range of architectures, but they are bare metal toolchains (cannot build Linux userspace programs) and updated infrequently.

To fill in this gap, Bootlin is happy to announce its new service to the embedded Linux community: toolchains.bootlin.com. 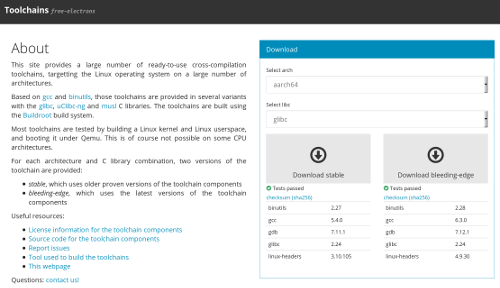 This web site provides a large number of cross-compilation toolchains, available for a wide range of architectures, in multiple variants. The toolchains are based on the classical combination of gcc, binutils and gdb, plus a C library. We currently provide a total of 138 toolchains, covering many combinations of:

The toolchains are built with Buildroot, but can be used for any purpose: build a Linux kernel or bootloader, as a pre-built toolchain for your favorite embedded Linux build system, etc. The toolchains are available in tarballs, together with licensing information and instructions on how to rebuild the toolchain if needed.

We are very much interested in your feedback about those toolchains, so do not hesitate to report bugs or make suggestions in our issue tracker!

This work was done as part of the internship of Florent Jacquet at Bootlin.